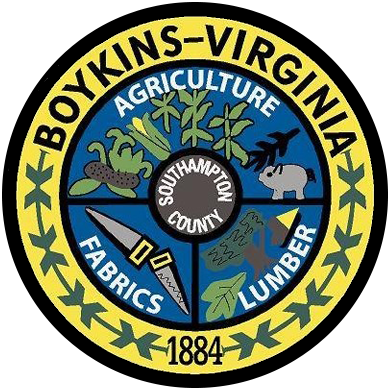 Welcome to Town of Boykins!

John Boykin acquired a tract to the south of what became the town on the road to Severn, North Carolina, which lay partly in Virginia and partly in North Carolina. In 1829 Boykin and his wife sold the land and moved to Alabama. In 1835, Edward Beaton, one of three brothers who were living in Isle of Wight County near the Blackwater River, came to Southampton County and acquired the tract of land that is now known as Boykins from Francis Rochelle. Beaton, who was a continuous resident of Boykins until his death in 1880, is given credit for the founding of the town.

The Beaton-Powell House was listed on the National Register of Historic Places in 2008. Completed in 1857, this two-story plantation house has a living area that exceeds four thousand square feet and has an additional five hundred square feet of porch space. This residence has classic Greek Revival characteristics: the front portico with its pediment-like roof line supported by four columns; its bilateral symmetry; the corner pilasters that shoulder a wide entablature; the two- and four-panel doors; the two-over-two double hung sash windows and the five-inch exposure clapboard. The large roof overhang supported by massive brackets illustrates the Italianate influence. The milled timber framing is supported by a continuous brick foundation. All eight fireplace surrounds, exposed heart pine floors and most of its plaster walls, ceilings, crown molding and medallions are a few of the interior features that remain undisturbed. The original kitchen, which predates the house, still exists but has been relocated nearby, off the property. A noncontributing building on the property was constructed to complement the house.

The Beaton-Powell House has an abundance of Italianate embellishments but is primarily of the Greek Revival Style, alternately, in its antebellum heyday, called the National or Democratic and even the American Greek Revival Style.1 This two-story plantation house was built in 1857 on a 600-acre tract of land, known as Boykins Depot by the town's founder, Edward Beaton.2 The house is now located on a half-acre landscaped lot at the northwest corner of Main Street and Virginia Avenue in the Town of Boykins, Southampton County, Virginia.3 Three conspicuous diagonal braces link together four paired, seven-inch square chamfered columns that support the massive, elaborate two tiered central portico which is capped with a gable roof. 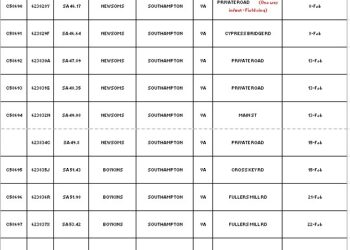 CSX Transportation has recently announced a track maintenance project set to begin on February 6th, 2023. This will be a… Read More

CSX Transportation has recently announced a track maintenance project set to begin on February 6th, 2023. This will be a 3-week project that will begin on 2/6/23 and end on/around 2/24/23. It will impact the Town of Boykins and surrounding areas. The attached image lists the crossings that will be closing and the respective closure dates. Please keep in mind these dates are merely the best approximation CSX can provide at this time and are subject to change due to unforeseen circumstances once work begins. Crossings will be closed anywhere from 3-5 days due to the type of maintenance they are set to receive. However, CSX has stated they will do their best to lower the closing time to 24 hours for the one way in/out crossings.